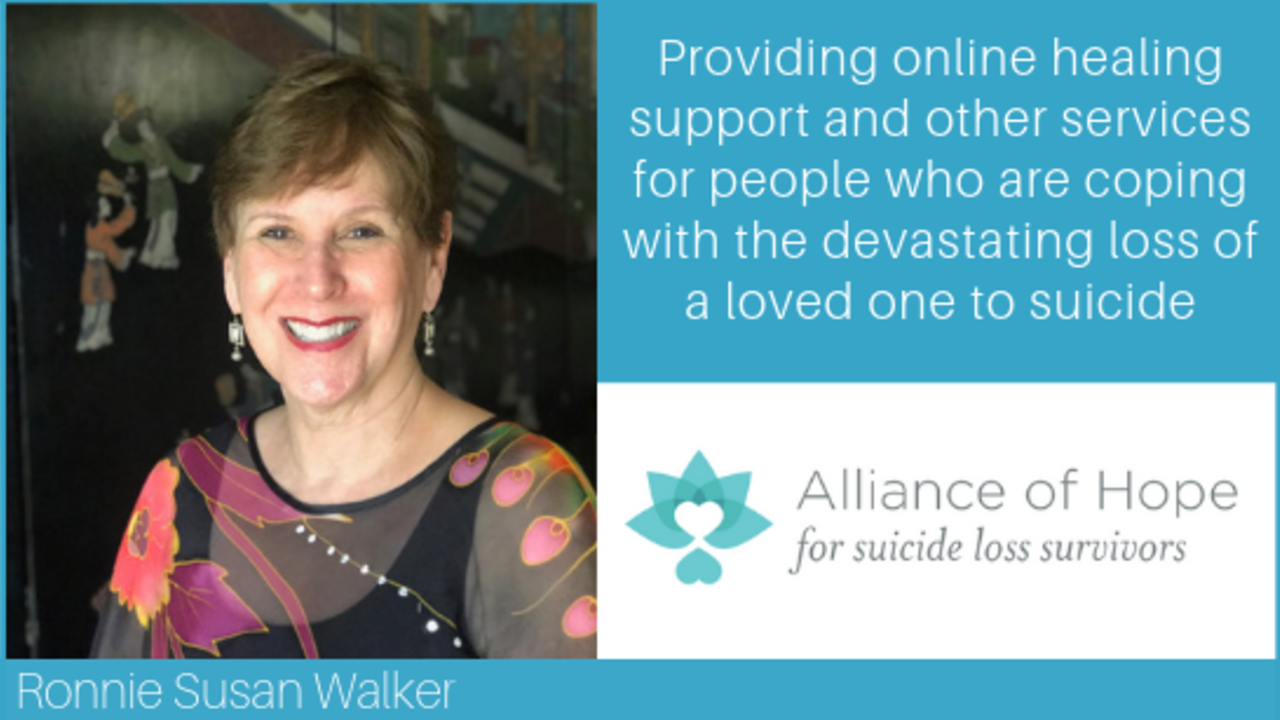 Earlier this year, Ronnie Susan Walker was honored at a Catholic Charities luncheon in Chicago for her  “extraordinary service to suicide loss survivors” as the founder of Alliance of Hope. Since 2008, the nonprofit has been working to decrease stigma, increase understanding of the suicide loss experience, and provide direct support to survivors.

In a way, it brought Ronnie full circle on a journey that began in 1995, when her stepson, Chan, ended his life.

Channing Werner Stowell was a brilliant young man, equally good at school and sports, talented enough to be accepted at Stanford University. But he also suffered from bipolar disorder, which caused severe mood swings and suicidal thoughts. In his junior year, he fell into a deep depression and killed himself. He was 21 years old.

His death devastated her. For weeks after his memorial service, she was in a fog. She was a seasoned mental health counselor, but little in her training could help her navigate through the swirl of emotions that she - like most suicide loss survivors - endure: anxiety, guilt, anger, despair.

Ultimately, she placed a call to the Catholic Charities LOSS Program and was told that she should come in the next day to meet a counselor. Her relief, she said, was palpable.

Recovery took time. Her work suffered. Her marriage to Chan’s father faltered and ultimately ended. But the journey also pointed her in a new direction with a new mission. She became a counselor for the LOSS Program that helped her and discovered the rewards of helping others be able to smile again.

She also realized that she had been very fortunate; many people didn’t have access to a program like LOSS. Even the Internet didn’t have much in the way of online support for suicide loss survivors.

Ronnie decided to change that.

She took a class at a local high school to learn how to build a website. Her goal was simple: create an online community where survivors of suicide loss would feel welcome, find friendship, and experience the healing that comes with compassionate peer support.

The site launched in 2008. People slowly found it and those needing help began to trickle in. Word spread and that trickle became something much larger. Now, the site hosts almost 16,000 loss survivors from all over the world, operating as a 24/7 online support group that is overseen by a mental health counselor and trained moderators.

Last year, Alliance of Hope launched a new website that is a comprehensive resource for survivors and the professionals who serve them. It includes a blog with wisdom from survivors, books dealing with suicide and loss, and a special section on helping children deal with suicide.  Phone and Skype consultations by trained trauma and loss professionals are also offered for new survivors who cannot find local support.

Ronnie feels it is important for people who are further along in the journey dealing with suicide to share their stories so those who have just suffered a loss know that the pain they feel will eventually diminish (although it will never totally disappear). Survival is possible; even being happy again is possible.

“When we are wandering in the dark, after the suicide of a loved one, it may be hard to believe that light will ever return to one’s life – but it does,” she said. “We are forever altered by the loss of a loved one, but the vast majority of people do survive and even eventually go beyond just surviving to find themselves making a meaningful difference in ways they never anticipated.”

Ronnie’s story is an example of that transformation.

To learn more about Alliance of Hope, please visit its website at www.allianceofhope.org.