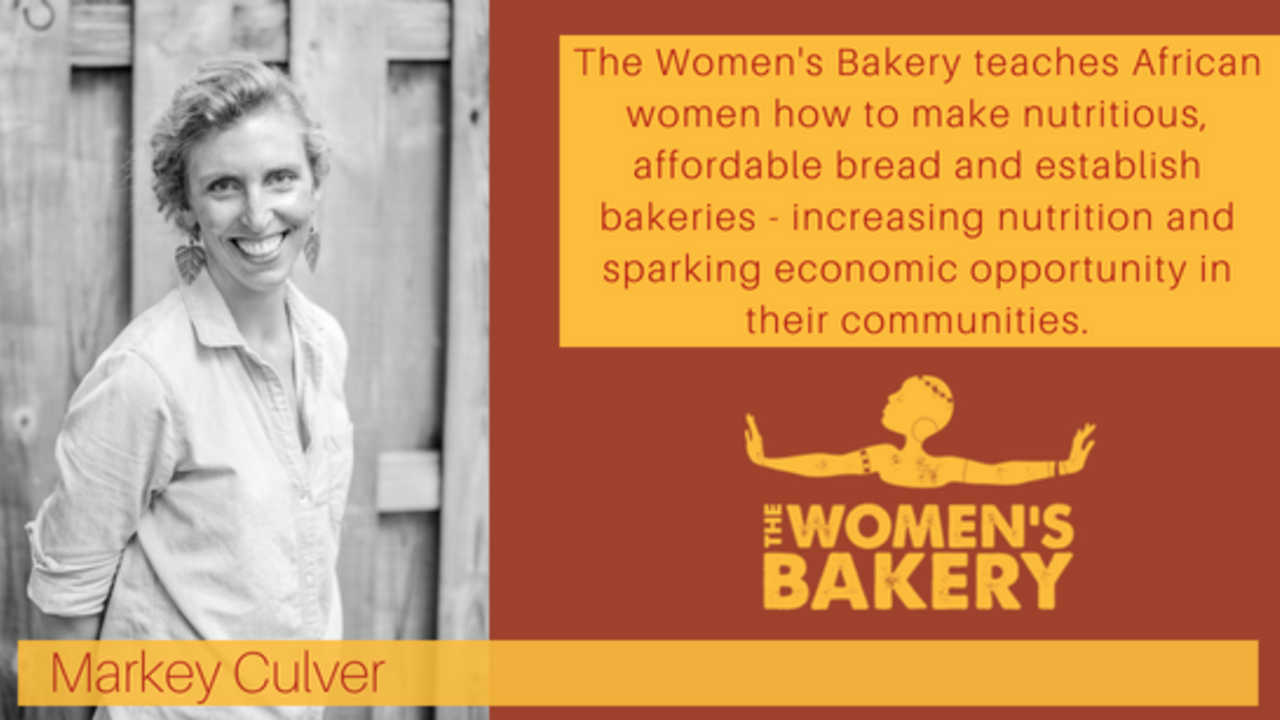 What do you see when you look at a loaf of bread? The makings of a sandwich? A conveyance for butter? The downfall of your carb-free diet?

When Markey Culver sees a loaf of bread, she sees the power to change the world.

The realization came to her almost by accident. Eight years ago, she was in Bushoga, Rwanda, a brand new Peace Corps volunteer looking to help the small rural community improve its fortunes. She wasn’t quite sure how to address the ills that affected the area, which included malnutrition, economic hardships, and a lack of opportunity, particularly for women.

Plus, she was hungry all of the time. Heeding her Peace Corps training, Markey lived like the locals lived, which meant she only ate one meal a day. She thought this situation could be quickly improved because the women in Bushoga grew crops of cabbage, avocado, onions, and tomatoes. Why not add a meal each day with a salad? The locals weren't familiar with the concept of combining their vegetables into a raw mixture, so Markey gave lessons in creating salads.

One day, Markey thought it would be nice to have some bread with the salad. Her Peace Corps manual offered a simple recipe (water, flour, yeast, salt, sugar) and instructions on building a basic dutch over using two pots and four stones over a fire. She could get all the ingredients locally, so she made her first loaf of bread.

When her salad students came that day, they were amazed. Where did you get this, they asked? Bread was a scarce commodity in Bushoga. Markey explained she baked it and the women asked if she could teach them.

“I thought to myself, ‘Well, I’ve only made bread once in my life – and it was this morning,’” Markey recalled. “But sure, why not, I’ll teach you.”

The next day, seven women learned how to make bread, and Markey thought she had a lead on how to address at least one of the problems. She could teach the women how to make more complex loaves of bread with local fats, protein, and micronutrients like peanut flower, beets and carrots, and the community would have more nutritious food.

But then her students took it a step further. Two of them sold their bread at a local market.

"It was amazing – these industrious women had created a market for their bread; they were meeting a local demand with local supply," Markey said. "It was like my mind exploded – this was it. Bread could be an answer to the three problems I had seen. Something as simple as a loaf of bread had the power to create jobs for women, improve community nutrition and spark local economic growth."

Markey and her friend from the Peace Corps, Julie Greene – who was also teaching women to make nutritious bread in her Peace Corps village – founded The Women’s Bakery to teach women how to make and sell affordable, nutritious bread and manage successful bakeries in their communities. The bread is more affordable because they don't sell it in loaves, but in slices, meaning families purchase what they need on a given day.

In less than three years, the nonprofit had educated 80 women, launched half a dozen bakeries, doubled the annual income for the women working at the bakeries, and directly impacted the lives of the women’s children – not only because they are eating better, but because their mothers can invest in their nutrition, education and general safety.

For these women, the simple process of mixing, kneading, rising and baking has transformed lives.

“These women are earning money, they are investing into their families and into their communities, and the skills they have earned can never be taken away,” she said. “These women now have access to choices that they didn’t have before and they did it for themselves. They have amazing levels of confidence. All I did was bake a loaf of bread and tell them they could do it.”