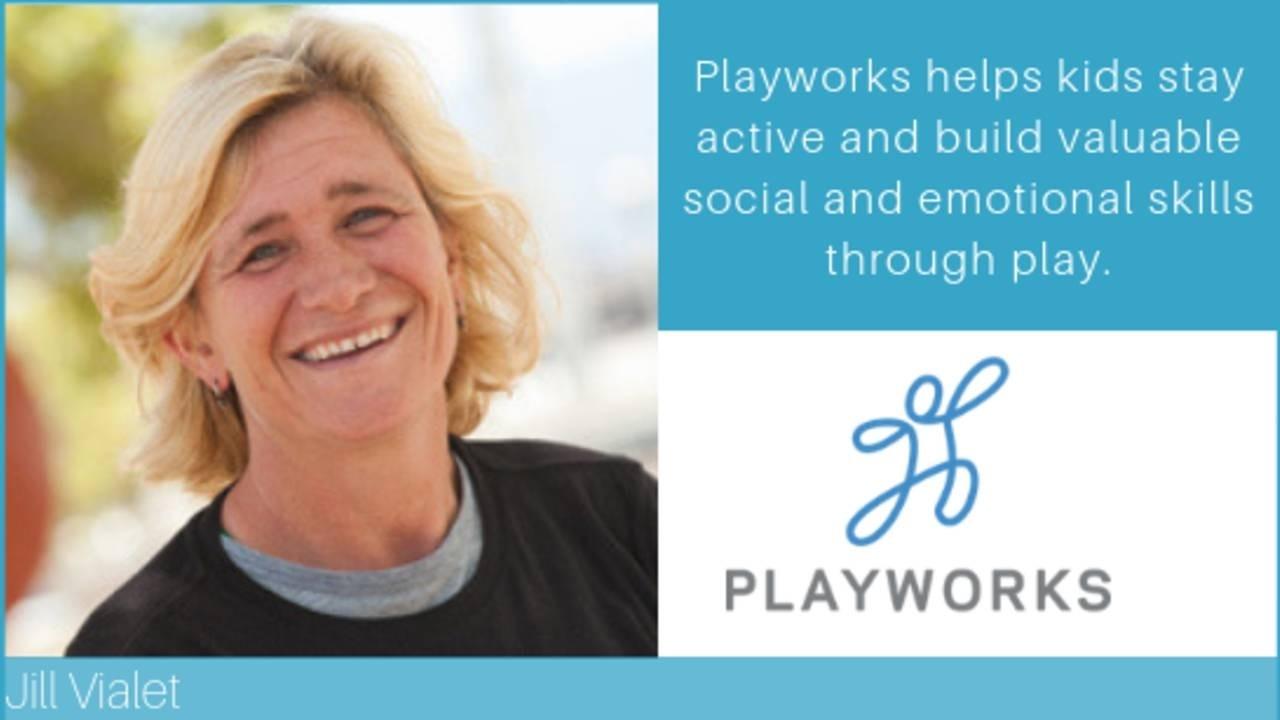 For more than 20 years, Jill Vialet and her team at Playworks have been building a better recess for kids.

That might sound a little frivolous, but at a time when recess is getting squeezed out because schools are trying to maximize instruction time, it’s actually a big deal.

Play, which has been described as “the universal language of children,” offers kids a needed break in the school day, a reset button from the rigors of academic challenges. But supervised play also gives kids numerous cognitive, social and emotional benefits – not to mention physical activity – that helps them develop.

Jill was already established in the nonprofit world when she started Playworks in 1996. She had founded and was serving as the executive director of the Museum of Children’s Art in Oakland when she met up with an elementary school principal frustrated with children acting out (the principal was late to her meeting with Jill because she was busy dealing with three boys being sent to the principal’s office for the third time that week.)

The kids weren’t bad; they just were terrors on the playground, where chaos seemed to rule.

“Couldn’t something be done about recess?” the principal wondered.

That set Jill on a journey to improve playtime and recess around the country.

Playworks uses coaches to develop play programs for schools before the bell rings, during school recess and after school. With balls, jump ropes, cones and a lot of enthusiasm, they engage kids in play, even wallflowers on the sidelines who may not have really played with other kids before.

In addition to the playground, play is incorporated throughout the school day, with coaches or school staff leading class game time or bringing games into the hallways or assemblies. Students learn about cooperation, communication, inclusion, and teamwork all while having fun. Playworks is changing school climate by leveraging the power of play.

The program also encourages leadership through its Junior Coach program, which encourages teams of students to work together to learn games, fair play and positive conflict resolution - and then teach these skills and lessons to their classmates.

Playworks offers a range of programs to schools including full- and part-time coaches, training and online services, so schools can tailor a program that will fit their needs.

Even just following Playworks’ Six Principals of Play can help ensure the most joyful, free, and inclusive experience for all children and adults. They are:

Jill’s work in nonprofits and Playworks’ success has garnered her international acclaim.

Among the honors are her and Playworks being selected as part of the Clinton Global Initiative in 2009. In 2011, Jill was named by Forbes magazine as one of the top 30 leading social entrepreneurs and recognized by the Women’s Sports Foundation as one of 40 Women Leaders in honor of the anniversary of Title IX. She is also a popular public speaker, an author and now the founder of yet another nonprofit, called Substantial, that is re-designing the way we recruit, train, and support substitute teachers.

But let’s get back to recess.

In the 22 years since Playworks started, it has grown dramatically. From two schools in Oakland, the nonprofit is now reaching 1 million students at 2,000 schools around the country. But they are not taking their foot off the gas any time soon. The group has announced that it plans to expand its reach to 3.5 million students in 7,000 schools by 2020.

Check out Playwork’s awesome website. It makes a strong case for the importance of play and why “fun and games” are key in helping kids grow, academically, socially and emotionally.