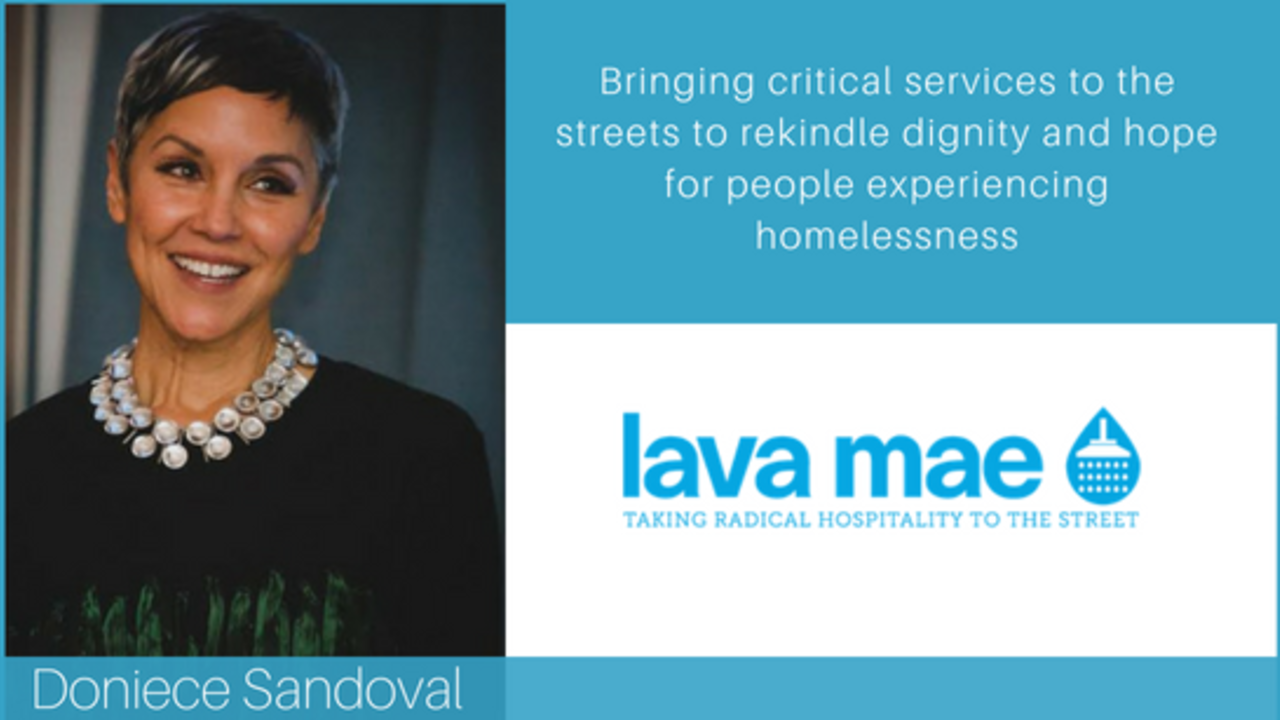 That’s why I think the work of a transplanted Texas native will make you feel inspired and hopeful for the future.

Meet Doniece Sandoval, the founder and CEO of Lava Mae, who created a “radical” take on hospitality in 2013. Lava Mae focuses on giving showers, bathrooms, personal hygiene, and pop-up care facilities to those she calls “houseless neighbors” across the San Francisco and Los Angeles areas.

Doniece’s inspiration came from her everyday experience from her neighborhood, watching her neighbors lives change before her eyes, and a seemingly normal cab ride that ended up changing her life forever.

Doniece had lived in San Francisco for quite some time when she saw the world around her begin to shift. She saw elderly neighbors become evicted and displaced, seeking refuge in their cars, only to have them repossessed. Turning to shelters was impossible due to the waitlists that were over a thousand people long. Many people die before being able to get the help that they truly need.

Her experience in the cab was just as devastating to witness. While driving through the most concentrated area of homelessness in San Francisco, her cab driver pointed out “the land of broken dreams.” This declaration is what really hit Doniece. For the first time, she looked out and saw these people as children, realizing that none of them ever imagined growing up to have no home.

Doniece knew she wanted to help, but wasn’t sure how. Until she met a woman on the street panhandling who said she “would never be clean.” Later that day, Doniece picked up a newspaper and saw that old city buses were being retired. That’s when it hit her. Doniece could take the buses and convert them to showers and bathrooms so that people were able to clean up, and rediscover their self-worth. Since then, they have been able to transition to offer commercial shower trailers in order to expand their reach.

Lava Mae is taking what Doniece calls “radical hospitality” to the street in a unique way. The act of providing a place to clean up is helping some of our neighbors in need a way to rekindle the dignity that has often been lost during their time on the streets. As the website notes, it takes people from “transportation to transformation.”

Lava Mae’s mission  is based on three core values: humanity, innovation, and collaboration. Its team believes that opportunity presents itself when people are treated with respect and value; they are on a constant search for creating new programs and resources to help those in need; and they have a history of creating partnerships to ensure increased access to services that allow people to begin to rebuild their lives.

Since 2013, Lava Mae has served over 10,000 guests and given over 35,000 showers to those in need, and has helped to inspire more than a dozen similar hygiene programs.

Lava Mae’s website has some powerful testimonies from guests at the mobile hygiene facilities in Los Angeles and San Francisco.

Marty was one of Doniece’s first guests at Lava Mae. After a few weeks of using the mobile hygiene services, Marty was able to get a job and save up his money to start his life again. Luis, another guest, notes that he is now able to walk down the street with his head held high. Then there’s  Paul, who sees Lava Mae as his “Tuesday family.” There are many more stories like this that convey the impact of Lava Mae through the words of those using their services.

Lava Mae recently released a toolkit to help people across the world replicate these mobile hygiene programs, which will now make this life changing mission a global effort. Since the release of this toolkit, they have had over 1,600 communities interested in creating mobile hygiene centers. If even 10% of those communities take part, that’s over 1 million showers that Lava Mae will have been able to provide - Now that’s a Woman on an Amazing Mission!