An Inspiring Woman on a Mission: Diane Jarvis 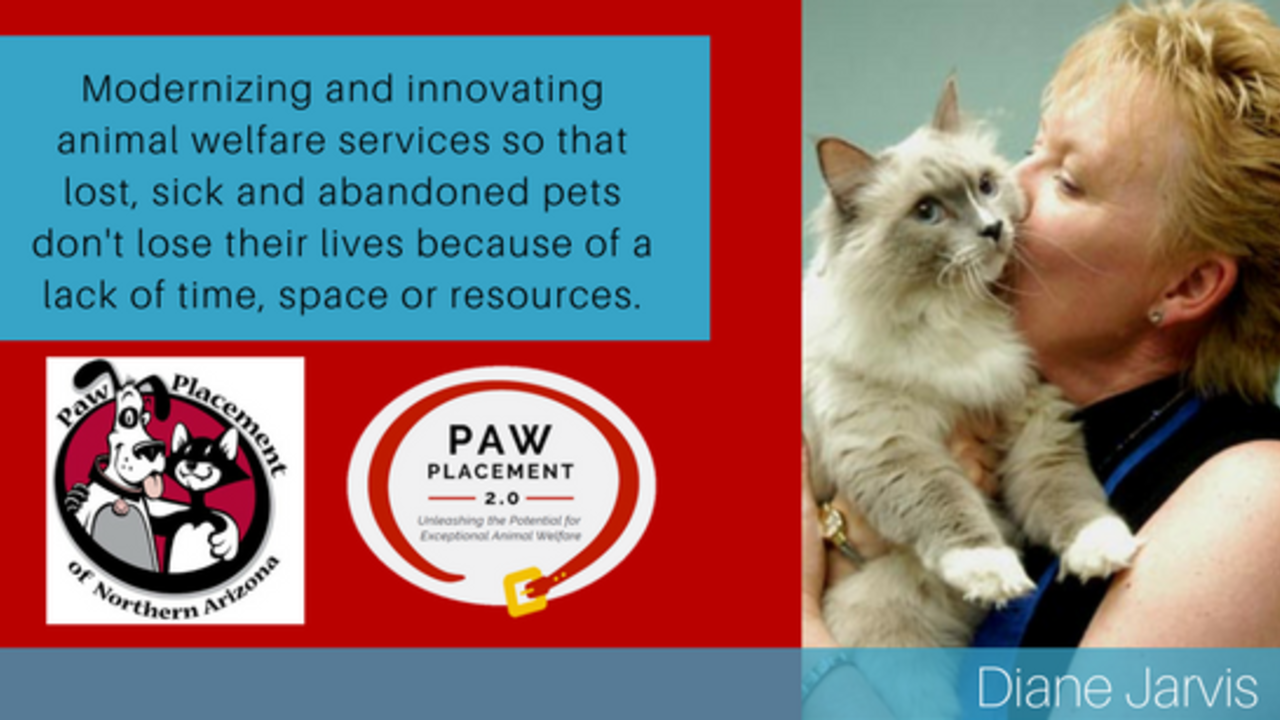 As most leaders of heart-centered nonprofits know, there’s an evolution that occurs as you become more and more passionate about your cause. You might have started out as a periodic donor or volunteered a few hours here and there. Or maybe you saw a problem and wondered if anyone was doing anything about it.

Then something happened that transformed your engagement. You started out as a helper and before you knew it, you became a full-throated advocate, leading the troops to fight the good fight.

It’s the nonprofit version of Diana Prince spinning around and the next thing you know, she’s turned into Wonder Woman.

Diane Jarvis has volunteered and been employed in animal rescue since 1994. Her superpower, however, is seeing facilities that aren’t operating to the best of their ability and pulling together people who can affect powerful improvements.

Probably the most dramatic example of that was when her family moved to Lodi, CA and she became involved with the Stockton Animal Shelter Friends (SASF). She asked what she could do and was told that volunteers were needed to clean out the county pound on Sundays as there were no paid employees on that day.

But the situation was a little more serious than that. Not only were there no employees during Sundays; the animals were totally on their own from 5 pm Saturday until 7 am Monday. That’s 38 hours; can you imagine leaving your pet alone for that long?

Often the animals were without adequate food or water. Kittens and puppies were found dead when the shelter reopened on Mondays. During her first Sunday there, Diane helped clean out 75 dog kennels (some with multiple dogs in them) and 100 cat cages. In one kennel, the dogs had gotten into a fight over food and one was dead.

It was horrific, it was inhumane, and it made Diane determine to bring about change.

A video of conditions was presented to officials, the mayor of Stockton was convinced to visit on a Sunday and soon the policies were reformed. The shelter was staffed 7 days a week. Hours were changed to include evenings to accommodate pet owners looking for their lost furry companions and SASF was allowed to assist in fostering and adopting out the animals.

The nonprofit worked with the city to open and operate an all-volunteer Adoption and Spay/Neuter center, where hundreds of cats and dogs found homes.  Vouchers were given out for discounted spay/neuter surgery, and schools and youth groups came to volunteer and learn about the humane treatment of animals.

Diane served as President of SASF for 3 years, taught all of the education classes, coordinated the Center operations, and was a member of the county Shelter Task Force that resulted in a $1.5 million expansion and improvement of the shelter.

She brought all of that expertise with her when her family moved to Flagstaff. For a time, she was the education director at a state-of-the-art shelter, but when a management change occurred, most of the existing staff was let go. Several of those staffers, including Diane, recognized that there was still a need in the Flagstaff community for help at the local animal control facility. Together they started Paw Placement of Northern Arizona.

With a mission of helping at-risk dogs and cats from the local regional shelter, they have fostered and found loving homes for hundreds of dogs and cats since December 2006.   Diane has spearheaded two annual fundraisers, Strut Your Mutt and Paws for the Perfect Taste, which have helped raise funds for medical care and supplies.

One of Paw Placements big passions is making sure that pets and their families can stay together even during challenging times. They offer assistance for emergency medical treatment for individuals who need help with vet bills, vouchers for spays and neuters, and the Pet Safety Net for people who need a safe temporary place for their pets. This can include people who need to go into a rehabilitation facility for a period, or a person who has to have surgery or is hospitalized with no one to care for the pets, and victims of domestic violence.

When reports showed that euthanasia rates were rising locally, Paw Placement worked with other nonprofits to address the issue and help bring the rates down.

Now the group has a new initiative which may result in Paw Placement not only assisting the local animal shelter, but actually operating it.

Under the banner of “Unleashing the Potential for Exceptional Animal Welfare,” Paw Placement 2.0 will bid on the contract to run the regional services later this year. She has won the support of kennels, veterinaries and other animal advocates to pursue this new venture.

Diane and her crew of dedicated community leaders and volunteers believe that with their experience in state-of-the-art animal welfare services and strategies, they can make sure more pets are reunited with owners, find their forever homes, or have safe shelter during time of crises. More importantly, Diane is determined to turn homeless pets into cherished family members in loving homes.