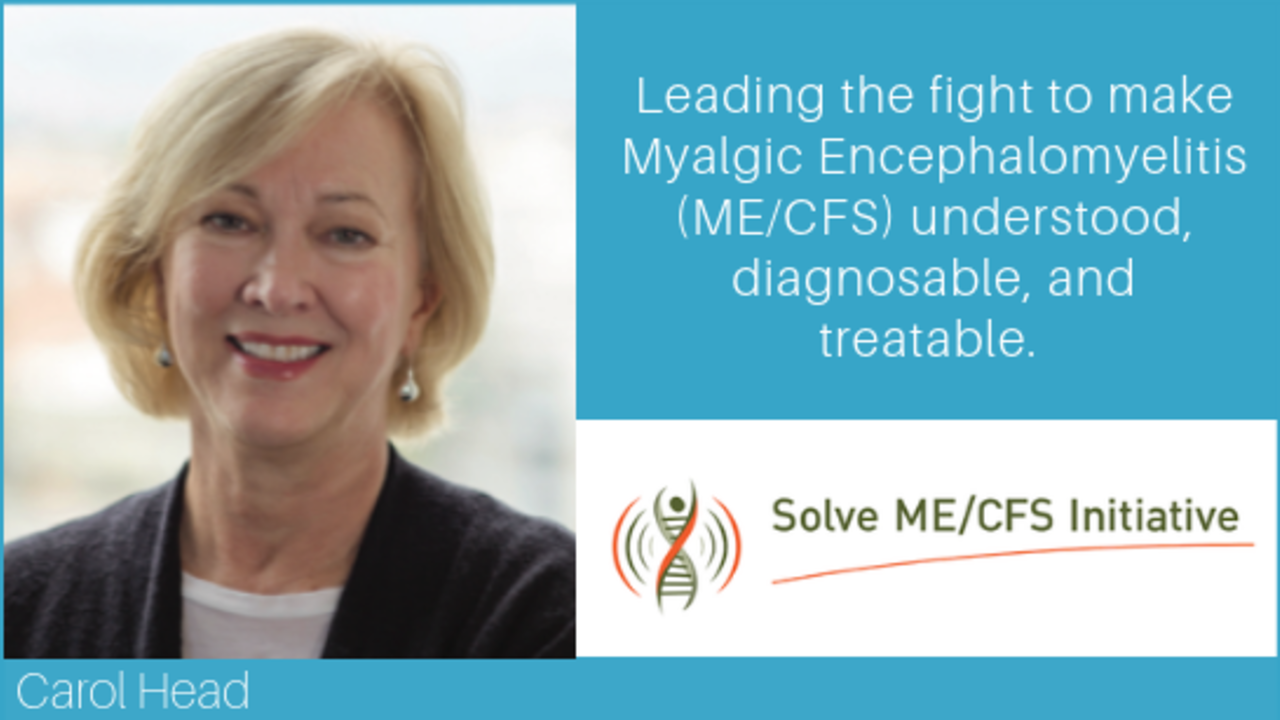 It was just the flu. It would be over in a couple of days. Nothing to worry about.

That’s what Carol Head thought when she became ill about 30 years ago, after finishing graduate school at Stanford University. She was looking forward to a full life with a career, family and sports (she founded the girl’s track team at her high school in Columbus, Indiana). Which would all start the moment she got over this nasty flu bug in a couple of days.

Except that’s not what happened.

“The days turned into weeks and more weeks, and then I was fully knocked down by something,” she recalled. “I had a deep, unescapable exhaustion no matter how much I tried to sleep, debilitating headaches and a constant sore throat.”

Carol went from doctor to doctor but found herself (and her symptoms) being dismissed. She was asked to take tests to see if she was depressed. She worried that she wouldn’t be able to hold down a job, be able to take care of herself, or even feel good again. For several years, she limped through the day so she could stay employed. But there also were a few months where even that was more than she could do; on those days, being able to take a shower was the daily goal.

Around that time, Carol gave up on western medicine and found an alternative practitioner who not only believed she was sick; he had seen the condition before – even if he didn’t have a name for it. Carol tried multiple alternative therapies and, very slowly, her symptoms decreased to the point where she could work again and have a more active life.

That makes her one of the very unusual lucky ones. About a quarter of the estimated 1 to 2.5 million people suffering from what is now known as Myalgic Encephalomyelitis are housebound. The disease, also referred to as Chronic Fatigue Syndrome, often has a maddeningly uneven trajectory with periods of relapse and remission.

What’s worse, the disease is often misunderstood because of what we don’t know. There’s no test for ME and no FDA-approved course of treatment. Carol couldn’t tell you what combination of therapies she tried led to a lessening of her symptoms, and it’s almost certain that what worked for her might not work for someone else with ME/CFS. The cause of the disease is still a mystery, and diagnosis can be extremely slow as many of the symptoms can be attributed to other illnesses.

One of the organizations Carol learned about when she became ill was CFIDS of America, which is now Solve ME/CFS Initiative (SMCI). So, when she was asked to become the nonprofit’s president in 2013, she felt she had landed a job that was not a job, but rather, her passion.

The mission of SMCI is to make ME/CFS widely understood, diagnosable, and treatable.  The primary work of the foundation is research, believing that the best way to serve people with ME is to understand the underlying physical causes of the disease.  The organization also believes that a component to improving the lives of people with ME/CFS is to fight the stigma and change the narrative around the disease. So SMCI takes advantage of opportunities to raise awareness and educate others, especially researchers, scientists, political leaders, and healthcare providers.

Its approach to this goal is multifaceted. Among SMCI’s initiatives are:

If that seems like a lot of diverse efforts, that’s because it is, but it’s necessary to make progress, according to Carol.

“We must push forward simultaneously on all fronts if we are going to make a difference in ME/CFS,” she said. “And when enough incremental advances are made in each of these problems, that’s when breakthrough happen.”

For all these efforts and more, Carol was recognized last year as a “Health Hero” in O, The Oprah Magazine. She was one of 14 visionaries being honored for their work to heal bodies, minds, and communities.
You can learn more are about Solving ME/CFS here, and you might also want to check out Carol’s personal story of her journey with ME/CFS that she shares in this YouTube video.