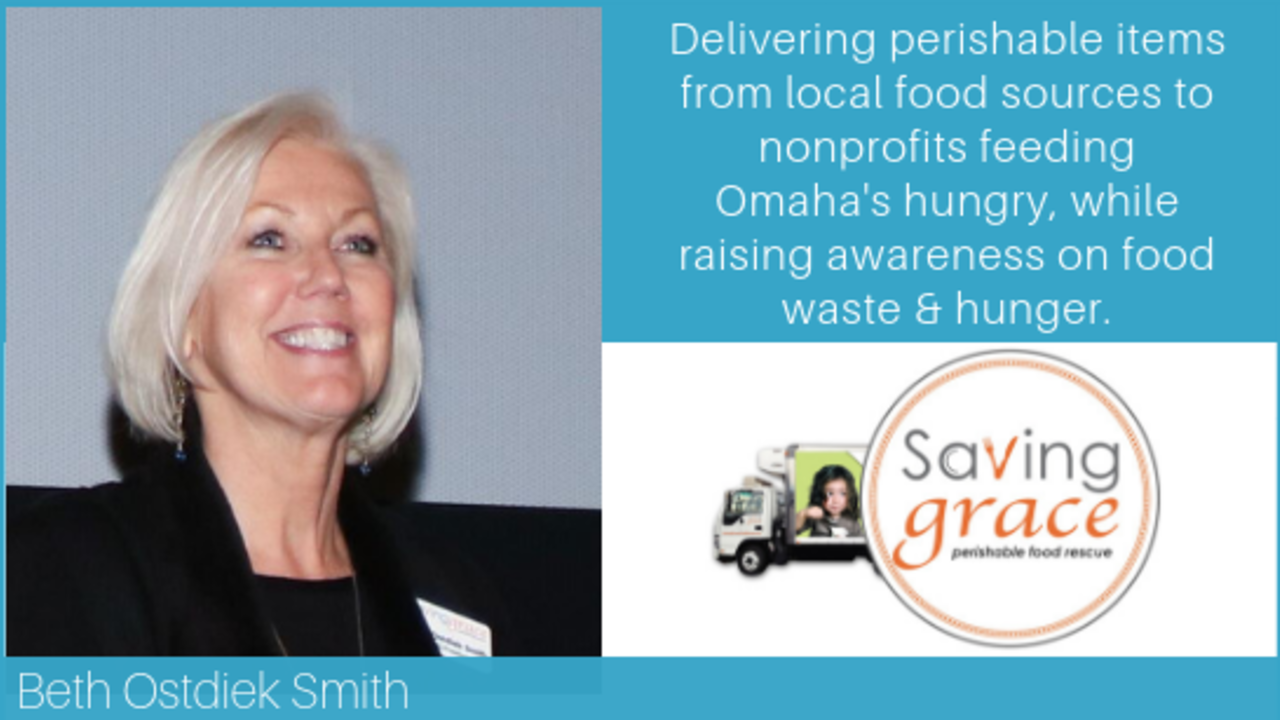 When Beth Ostdiek Smith was visiting her sister in Phoenix several years ago, she learned about a nonprofit that had an original take on the fight against hunger. It wasn’t a food bank or center collecting nonperishables; it was seeking out foods like meats, dairy, grains and more and connecting that food with nonprofits addressing food insecurity.

When she got back home to Omaha, she investigated whether there was a similar organization in her area. She knew from her personal experience as a nonprofit leader that a lot of groups host events and that much of that food prepared for these events is wasted.

It led Beth to found Saving Grace five years ago. It’s a “perishable food pipeline” that collects food from grocery stores, restaurants, convenience stores and caterers, then supplies it to more than three dozen nonprofits agency partners in the region.

Saving Grace started in September 2013 with one refrigerated truck hitting the streets of Omaha. Now it’s a fleet of three out five days a week connecting food to those who need it.

It’s very impressive what Saving Grace has been able to do in a mere five years:

That last point is part of Saving Grace’s other mission – engaging the community in a local “no food waste” movement.

Prominent on every page of the organization’s website is a request for readers to “Sign the Pledge” and join the global movement against food waste. (The block leads to a signup form that allows Saving Grace to send periodic e-communications focused on related food waste issues). The site asks people to go beyond their own kitchens by talking to their food purveyors and encouraging them to reduce waste and donate food that can be salvaged to causes like Saving Grace.

The emphasis on reducing food waste helps more than those on the receiving end of rescued food.

According to the wealth of statistics on Saving Grace’s website, a family of four loses about $600 a year in the form of food being thrown out. Food waste makes up 17% of the waste stream in Nebraska and is the number one item that fills up Omaha landfills.

“The goal to is to make sure we feed bellies, not landfills,” says Beth.

Saving Grace’s fundraisers are a thoughtful combination of fun, food and environmentalism. They’ve hosted food makeovers where chefs transform what most people consider scraps into incredible dishes. With other food-based nonprofits their story was the feature of a documentary.

And, in the latest advancement, Saving Grace now is expanding into craft brews.

Last month, the nonprofit launched Saving Grace Brews. It is providing local brewers with excess bread for a portion of the grain needed in the brewing process (the first was a Dunkelweiss beer created by Brickway Brewery & Distillery). A portion of the cost of each pint of the beer sold went to Saving Grace as a tasty fundraiser.