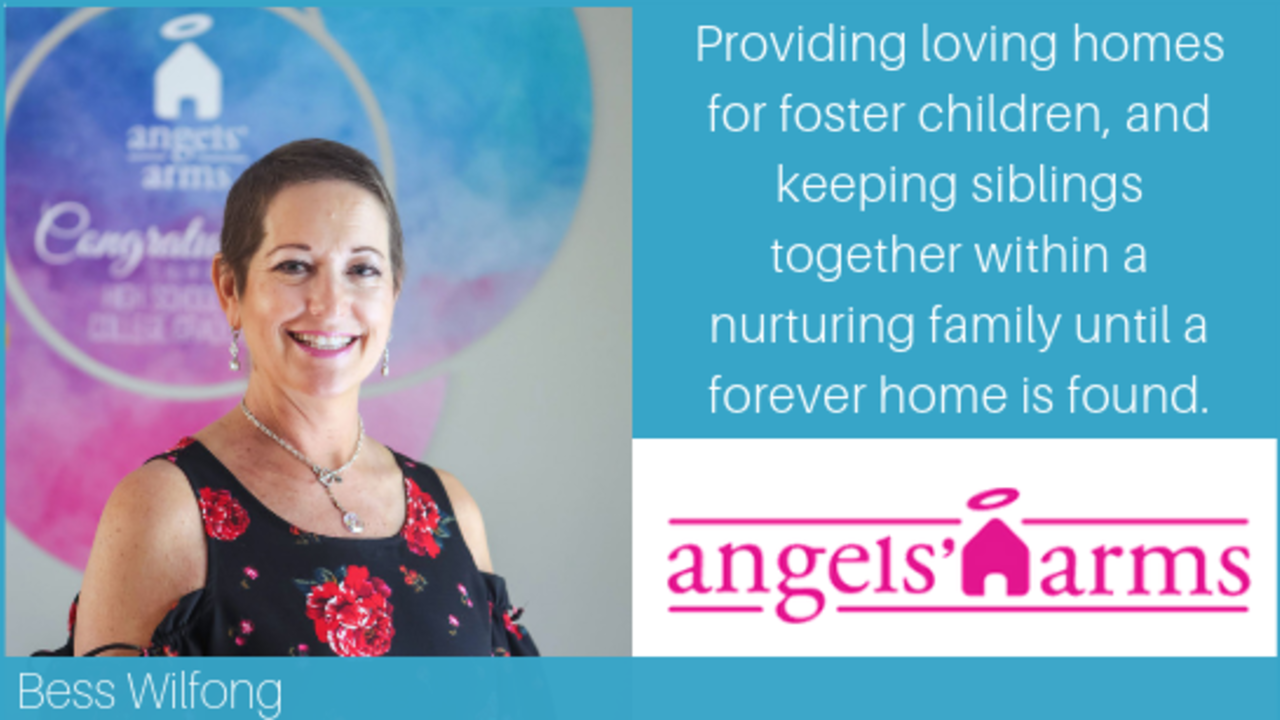 In September of this year, the St. Louis-based Angels’ Arms and its founder, Bess Wilfong, were honored by the prestigious the Congressional Coalition on Adoption. This bi-partisan caucus is dedicated to raising awareness about adoption and to eliminating barriers that hinder children from a basic right of a loving family.

It’s a cause to which Bess has devoted more than 20 years – first as a foster parent and then as the founder of Angels’ Arms.

Her nonprofit career came after she had already had a successful career in education. While working in the local school district, she founded a special academy for children who struggled in a traditional high school program. She also became a foster parent. In addition to finding out first-hand how difficult that role could be, she also discovered a challenge that faces the foster system every day – keeping siblings together.

When a parent is unable, unwilling or unfit to care for his or her children, the foster system’s first goal is to get the child into a stable home. If a group of sibling children require fostering and there’s no foster parents able to take in more than one child, the brothers and sisters are separated and sent to different homes.

It became apparent to Bess that there needed to be a place in St. Louis that would keep sibling groups together in a loving home environment. She also realized that the community at large isn’t given the chance to help and support the foster parents and children. In 2000, she began Angels’ Arms to achieve both those aims.

The first thing that’s wonderfully unique about Angels’ Arms is how they approach the need for homes for sibling groups. Instead of just hoping to find parents who could take in siblings, Angels’ Arms started buying homes in which they could house these children. They recruited foster parents to manage the homes. (The foster parents are not paid by Angels’ Arms, although they do receive a stipend from the state to care for their wards.) The group now has 13 of these large homes in St. Louis and the surrounding counties.

“It’s the most beautiful thing to know that they have each other,” Bess said. “It is so comforting for them to walk in together – as a unit – into one of these homes.”

Foster parents are not just there to provide a roof over these children’s heads and make sure they get three square meals a day. They also are passionate advocates for their foster kids and help them enjoy their childhoods despite often difficult circumstances.

“You want these children to be able to have a normal childhood – play ball, go to a show, go to the bounce house,” said Margie Hopper, one of the foster parents who is currently taking care of two sets of siblings (a total of eight children) at one of the Angels’ Arms homes. “They’re excited. It’s hard to explain the feeling and the joy you see in these children’s faces. Because often they haven’t been allowed to do these things.”

But these foster parents also let their children know that they have very high expectations of them, and that’s almost as important, according to kids.

“It’s almost expected of us foster youth to fail – not graduate, not go to college, not make a future for ourselves,” said Hannah, one of the foster children who is now studying in college to become a nurse.

The ideal for foster children is that they will land with a “forever family” through reunification with their parents or adoption. But many don’t, and the statistics for children who “age out” of the foster care system are pretty bleak. According to 2017 figures from the National Foster Youth Institute:

That’s why Angels’ Arms offers volunteers the chance become mentors to these children and to help them plan for a successful transition into adulthood. They call it Life Launch and it begins very early – sometimes for children as young as 12 or 13.

Mentors can provide youth with academic and emotional support as well as social experiences. Some mentors connect the teens to internships and job opportunities; some help teens learn how to dress appropriately or even fine dining table manners. The essence of mentoring is to provide a consistent, reliable and safe human relationship for the youth in the program.

“I think the number one thing we are teaching is that there are so many opportunities for them,” said Bess.

One phenomenally positive statistic about children in Angels’ Arms homes is their educational achievement. The organization maintains a 100% high school graduation rate for all Seniors who have been living in one of its homes for at least a year, compared to the average of 50 percent for all Missouri foster children. Many are attending college or trade school programs.

For those aging out of the foster system, Angels’ Arms provides an apartment in one of the houses (called, appropriately enough, “The Launch Pad”) where they can stay and learn to transition into adulthood and independence.

“The amount of kids who are in care who are graduating and going on to have an impact and sustain themselves because of Angels’ Arms is phenomenal,” said Javon, another former foster child who lived in an Angels’ Arms home.

The nonprofit has drawn literally thousands of people who form a support network for the 13 homes and more than 500 foster children who have been served by Angels’ Arms since it's founding. They include financial donors to building contractors to people who host birthday parties to doctors who provide free medical and dental services.

And, of course, there are the foster parents, creating an environment of love and hope for these children at their most vulnerable moment.