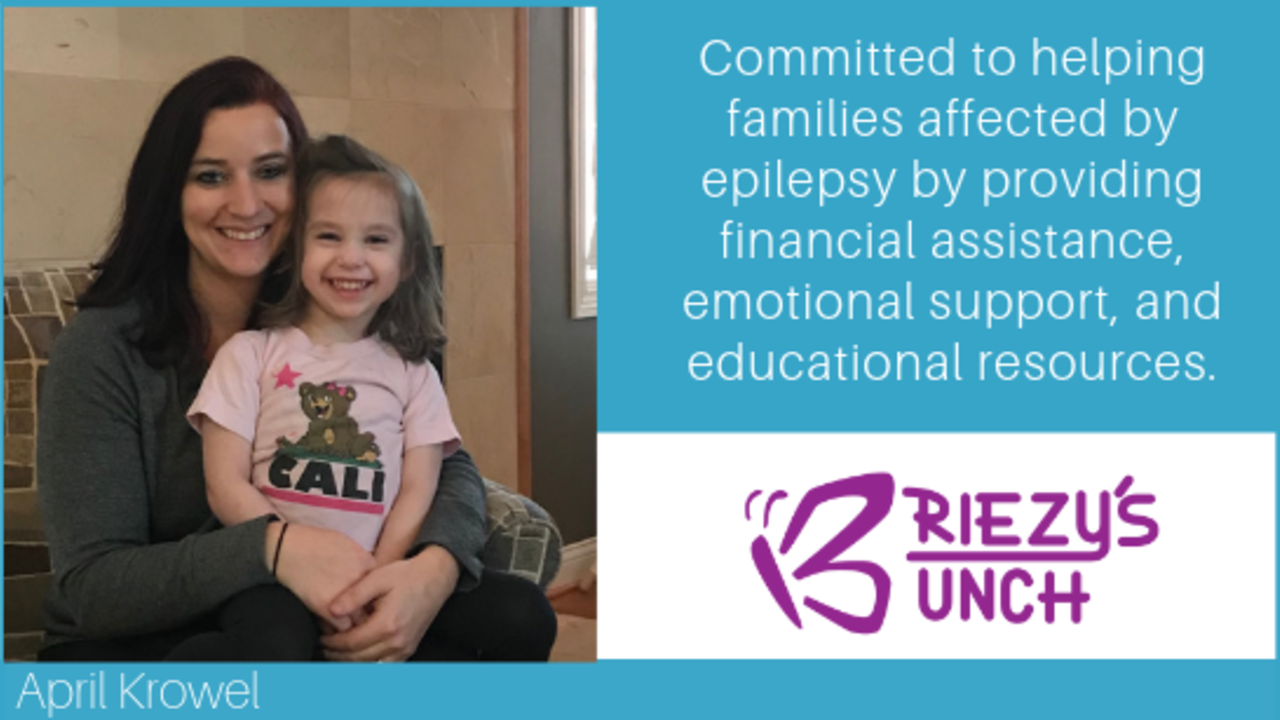 April Krowel says that February 13, 2016 was the worst night of their lives.

It’s not that she or her husband, Justin, had lived sheltered lives before then. They both served in the military in Iraq in the years following 9/11. They had seen friends die of suicide after they returned home from the war. But this was different.

They were in the middle of helping their youngest daughter, 8-month-old Aubrie – known as Brie or Briezy – transition to sleeping on her own in her crib. She had done it for a few nights, but for some reason they decided to have Aubrie in bed with them that night.

Then, around 3 am, they work up to their child having a seizure.

“There really are no words for the panic that ensued,” April says.

Briezy was rushed to the hospital, where she had another seizure. Initial tests and observation didn’t point to any definite cause for the seizures. Several weeks later, after several more instances, a neurology resident at a children’s hospital suggested having Briezy genetically tested. The results confirmed that Briezy had the SCN1A mutation.

The diagnosis meant that Briezy suffered from a specific form of epileptic disorders known as Dravet. Mild cases involve simple seizures, but full-blown Dravet can be catastrophic and lead to severe developmental disabilities.

Thus, the Krowel family began a never-ending saga. It’s not only the seizures, which have been countless, but the fear that accompanies them. Epilepsy, which affects about 1.2 percent of the U.S. population - including almost half a million children - is highly unpredictable. Families never know when the next episode will happen, how long it will last, or how severe it might be.

On top of that, insurance coverage is often inadequate for sufferers of epilepsy. If your insurer doesn’t cover two ambulance trips in the same day, but your child is released from the hospital and has another seizure less than 24 hours later, what do you do?

Then there was the lack of information on the subject. The Krowels had to seek out information on how Aubrie’s condition might affect her development, early intervention efforts, and things like sudden unexplained death in epilepsy.

April’s life has always been one of service. She was in high school when the terrorist attacks of 9/11 occurred, and signed up with the military shortly thereafter. She graduated from high school in 2002, got married in early 2003, and was deployed to Iraq with her husband just a few weeks later.

After serving overseas for two years, she came home and saw friends commit suicide and a mental health system that wasn’t helping them. It motivated her to go back to school where she ultimately earned a doctorate in psychological counseling and became a neuropsychology postdoctoral fellow at the Brain Performance and Psychology Center in Indianapolis.

Faced with the challenges of Aubrie’s condition, April and Justin reacted the only way they knew how - by figuring out how they could help others in the same situation.

The two founded the nonprofit Briezy’s Bunch in 2017, about a year after Aubrie’s diagnosis. The group focuses on providing financial assistance for critical care needs when insurance denies coverage; educating families and the public with information about epilepsy (and working to reduce the stigma that surrounds the disorder); and meeting the emotional needs of people affected by epilepsy in the Indianapolis area.

Their experience with Briezy allowed the couple to marshal the facts around childhood epilepsy, which gave them the ability to help numerous families as they cope with an epilepsy diagnosis.

"I can’t begin to tell you how much they are needed in our community,” said one of their clients, Christy, whose daughter suddenly started having Grand Mal seizures. “There is no one that has provided the amount of information that they have. You have a million questions. Briezy’s Bunch has answers.”

Briezy’s Bunch also offers a support group for anyone affected by epilepsy, including families and caregivers.

The group’s impact has been felt so quickly that when the local United Way celebrated its 100th anniversary last year by naming “100 Heroes” in the Indianapolis area, April made the list – even though Briezy’s Bunch was less than a year old.

The Krowels have advocated for more resources for those with epilepsy and their families, and won the support of community leaders, like Indiana State Senator Jim Merritt.

Aubrie, who will turn four this summer, is doing well. She continues to present on the “mild” end of the Dravet spectrum and continues to have daily small seizures, but hasn't been hospitalized for seizures in more than a year. Her cognitive skills have improved greatly since starting preschool last August and again when a new medication was added to her treatment regimen.

For families like the Krowels, however, the real fear is that the disorder can become more severe without warning.

“For us and for families like ours, the worrying never ends,” April says. “That’s why we started Briezy’s Bunch. You can feel so alone and isolated; people often don’t understand what families go through with this disorder. We wanted to create a space to discuss the challenges, share our experiences but also celebrate the milestones of our family members.”

You can learn more about Briezy’s Bunch here.