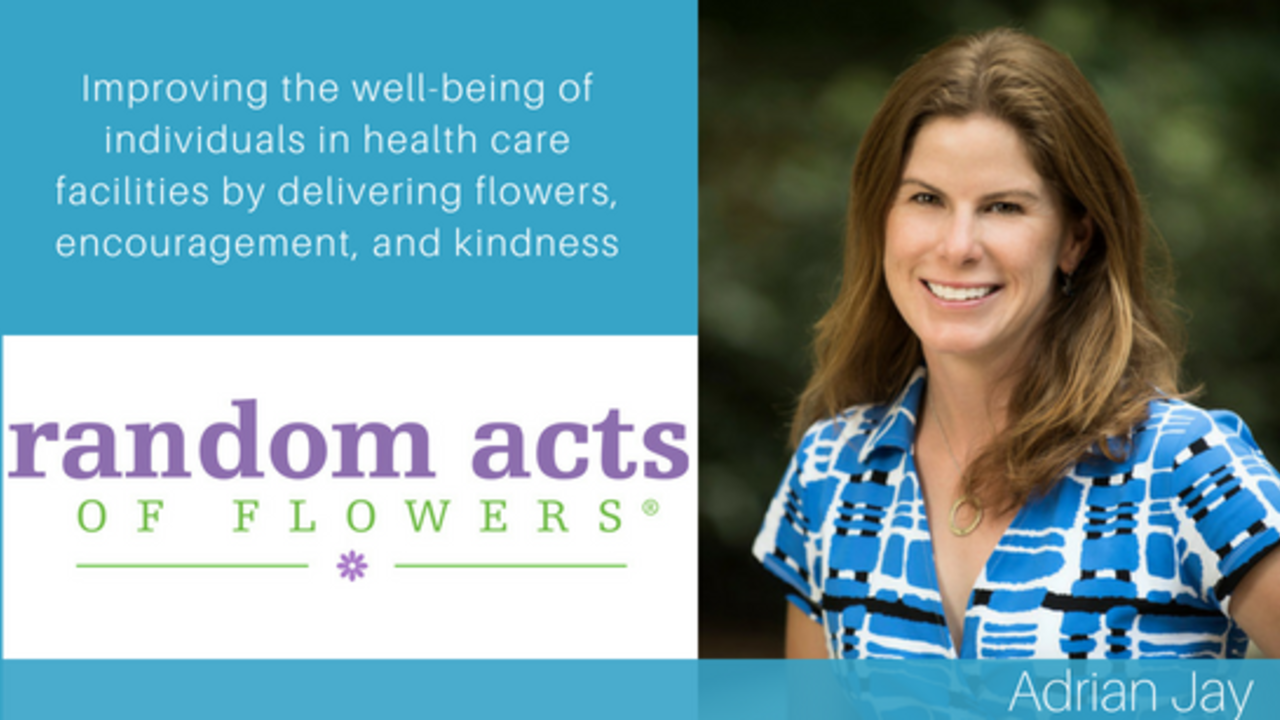 Getting flowers helps to immediately improve a person’s mood, but did you know they also aid in the recovery process?

As humans, receiving flowers lets us know that we are cared for and loved by the people in our lives. But, scientifically speaking, they also help improve memory, concentration and boost brain cells due to their production and release of oxygen.

Random Acts of Flowers started out of tragedy when Adrian Jay, co-founder, almost lost her husband, Larsen, to a nearly fatal accident that left him in a trauma center in 2007. The couple started getting flowers and visitors immediately. A large portion of the flowers were from friends that they hadn’t heard from in years, but still felt close and connected enough to reach out. The outpouring of flower deliveries and daily visitors helped remind the couple how much support and love that they had from the people in their lives. It helped boost Larsen’s well-being and gave him the confidence to keep going.

The mission of Random Acts of Flowers is to improve the well-being and emotional health of individuals who are in health care facilities by giving encouragement, and personal moments of kindness through their delivery of recycled flowers.

The nonprofit is 100% green, receiving all flowers through donations by grocery stores, wholesalers, memorial services, weddings, and special events. They take the flowers, deconstructing the bouquets, composting the dead flowers and create new arrangements to then deliver to hospitals, nursing homes, and hospice care facilities across the nation.

For Adrian, the deliveries were a way to split up the day and warm her heart while helping her husband through recovery. It was a respite in days filled with doctor visits, surgeries, and the therapy appointments - and something that they began to look forward to. When the flowers were delivered, she would create new arrangements and tend to them during her long days at the hospital. Adrian found that writing thank you cards were another way to help pass the time and keep her busy.

When Larsen was finally able to move about the hospital, he noticed that many of his fellow patients didn’t receive flowers or the support of visitors that he had received himself. Moments later, they decided to take the bouquets of flowers from his room to his fellow patients to aid in the recovery process and share some happiness in an often dark time.

When Adrian and Larsen first founded Random Acts of Flowers, her initial involvement was a branch off of her role as a caregiver. She helped with the behind the scenes work with mission development, fundraising, proofing materials, board recruitment, news releases and by sharing the organization's story.

Her involvement has expanded over the years and now serves as a peer mentor for caregivers in the Trauma Survivors Network.

With flowers being thrown away every day, and people in need of a pick me up, Adrian and Jay looked around and saw no one bridging that gap. That’s when they decided to repurpose floral bouquets and deliver them to those who needed a pick me up. “Random Acts of Flowers was a big part of Larsen’s recovery” said Adrian, “Paying forward the kindness he received propelled him to get better.”

Soon after its creation in 2007, Random Acts of Flowers began to flourish. They saw an outpouring of support, volunteers, and floral donations. By 2001, they had delivered 10,000 arrangements and by 2013, their success allowed them to expand to Tampa, FL and Greeneville, TN. In 2015, they made their 100,000th delivery of repurposed flowers and this year, after seeing growth across the United States, they are poised to make their 350,000th delivery.

Each delivery positively affects numerous lives, according to their website, which notes that “every delivery touches 1 recipient, 2.5 family members, 4 caregivers, and 4 volunteers.”

Random Acts of Flowers took a near tragedy and transformed it into a powerful mission of love, encouragement and bouquets of kindness that are truly making the difference for those recovering from illness or accidents.